Democratic Republic of the Congo

Located in Central Africa, the Democratic Republic of the Congo (DRC) is the continent’s second largest country, and the largest in sub-Saharan Africa. Despite being abundant in water, minerals and other natural resources, it is one of the world’s poorest and least developed nations. The extreme poverty that affects more than half the population is the legacy of years of violence, upheaval and instability.

The DRC’s recent history has been marred by the plundering of resources and by violence. Between 1998 and 2007, conflict claimed the lives of an estimated 5.4 million people, mainly through starvation and preventable or treatable disease. What became known as the Second Congo War ended in 2002.  However local conflicts involving numerous armed groups, continue in the eastern provinces (North and South Kivu, Haut Uele, Ituri) and in the south-east provinces of Katanga and Tanganyika.

The current fighting continues to be characterized by violence and brutality against civilians which causes huge waves of internally displaced persons (IDPs), by abduction of children to become soldiers, widespread sexual violence, as well as murders and kidnappings of civilians and humanitarians. There are 1.7 million IDPs living mainly across the eastern provinces. More than 857,000 former IDPs have returned to their homes in the past 18 months, often to find that their houses and possessions have been destroyed or looted. The trafficking of mineral resources, which has funded so much bloodshed, also continues.

In addition to extreme poverty and internal instability due to armed groups, the sustained and complex emergency includes civil unrests in neighbouring Central Africa Republic, Burundi, and South Sudan, as well as the political crises linked to the presidential elections initially planned in November 2016.

Economic development is limited not only by the security situation but also by the country’s neglected and broken infrastructure. Since 1990 the population has more than doubled. However, during the same period the proportion of land that is cultivated has risen by only 0.1 percent to 11.5 percent, and the country now has a 30-40 percent food production deficit.

DRC’s child mortality rates are among the highest in the world. According to the country’s Demographic and Health Survey 2013-14, 8 percent of children under the age of five suffer from acute malnutrition, and about 43 percent are chronically malnourished and show signs of stunting. In North and South Kivu and Kasaï provinces that figure is around 53 percent.

WFP has been present in the Democratic Republic of Congo since 1973. At present, our work focuses on saving lives, alleviating chronic hunger and assisting in recovery efforts. Given the worsening security situation, the lack of infrastructure and the inaccessibility of some communities in need, WFP, UNHAS, the Food Security Cluster (which WFP co-leads) and the Logistics and Information Cluster (led by WFP) are heavily involved in response operations.

WFP's work in DRC is helping people affected by the hunger crisis in Kasai. Please visit the Kasai emergency page.

What WFP is doing in Congo DR

WFP supports more than 1.6 million people, including vulnerable IDPs, conflict-affected host communities and 134,000 refugees from South Sudan, Central African Republic, Burundi and Rwanda. Where possible, WFP distributes cash and vouchers rather than food. This boosts local economies and encourages post-conflict recovery and dietary diversification. The early recovery of returnees is supported through Food for Work and Food for Assets programmes. 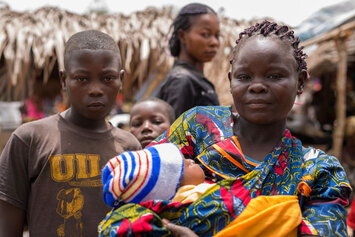 Since 2010 WFP has worked to enhance smallholder farmers’ capacity to produce and trade through a Purchase for Progress (P4P) programme run with FAO. P4P includes trainings on agricultural techniques and organization, literacy to promote women’s role in the communities, construction and rehabilitation of infrastructure. It also enables farmers to connect with markets and trade collectively. In 2016 P4P expanded to North Kivu province. 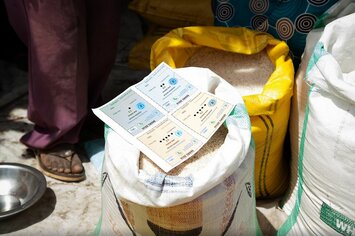 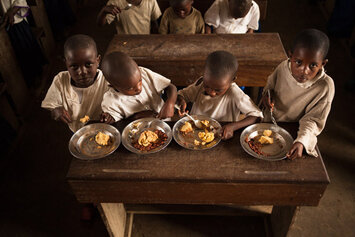 In areas in which acute malnutrition affects more than 10 percent of the population, WFP provides supplemental nutritional support to malnourished children under 5, and pregnant and breastfeeding women. The objective is to reduce maternal and infant mortality and to prevent malnutrition-related developmental disorders. 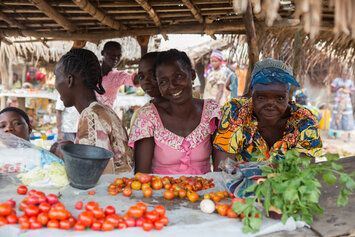 Poor road infrastructure and complete lack of maintenance impede both humanitarian assistance and local agricultural economies, even more so during rainy seasons. Road rehabilitation is critical to ensure humanitarian access to vulnerable people, and to allow smallholder farmers to transport their goods to the local markets.

The United Nations Humanitarian Air Service (UNHAS), has been supporting the humanitarian response in the DRC since 2008, providing aid workers, donors and diplomatic missions with safe, flexible, efficient, and cost-effective air transportation. It also enables to reach remote and challenging locations, as in Ituri and Haut Uele provinces where two UNHAS planes help support humanitarian assistance to South Sudanese refugees.

Achieving Zero Hunger is the work of many. Our work in the Democratic Republic of the Congo is made possible by the support and collaboration of our partners and donors, including: