The crisis in Syria, now in its sixth year, shows no sign of improvement, deepening the already grim outlook for the country.

Civilians continue to bear the brunt of the crisis, marked by intense hostilities across the country. Every day, more than 6,000 people are displaced, while many more suffer from attacks resulting in thousands of injuries and deaths.

The crisis has taken its toll on the humanitarian situation in the country, which has progressively deteriorated in the past five years. Between the beginning of the crisis and the end of 2015, the number of people in need of humanitarian assistance has risen to 13.5 million people. To date, this number has not decreased and 75 percent of Syria’s population still requires humanitarian assistance .

More than half of Syria’s population – over 11 million people –  has been displaced making it one of the largest mass displacements since World War II. Of these, 6.3 million people are now internally displaced within Syria, while more than 4.8 million are registered refugees in neighbouring countries and North Africa.

Syria’s economy is on the verge of collapse. Inflation in 2015 surged to about 38 percent, reflecting the general shortages and cuts in the subsidies of fuel and food products. Unemployment stands at more than 50 percent, an all-time high compared to a mere ten percent before the start of the crisis. Meanwhile, the cumulative economic loss incurred in five years of conflict are estimated at USD 254.7 billion.

The Syrian Pound (SYP) also continues to depreciate. In 2011, SYP 1,000 would buy USD 20.6. Now it buys only USD 1.9. A mounting economic crisis coupled with continued displacement and the destruction of vital infrastructure has resulted in very high poverty levels among the Syrian population; approximately four in five Syrians live in poverty.

Food production has also hit an all-time low, according to the latest Crop and Food Security Assessment Mission. Farmers are forced to leave their arable lands due to increased prices of agricultural inputs and the lack of access to farmland, while keeping animals is becoming ever more difficult and costly, forcing herding families to sell or slaughter their sheep, goats and poultry.

Insufficient food production, combined with reduced government subsidies and currency depreciation, has led to continuous and sharp increases in food prices since the beginning of the crisis. According to WFP’s Vulnerability Analysis and Mapping unit, a one-week ration of basic food supplies is now eight times more expensive than before the crisis

The collapse of the economy, soaring food prices, loss and disruption of livelihoods and arable lands, as well as the decline in food production have led to widespread food insecurity across Syria. Recent surveys from WFP’s mVAM Food Security Monitoring reports show that almost 80 percent of the households across the country are struggling to cope with the lack of food or money to buy it.

By the end of 2016, nine million people – almost half the population –  were in need of various forms of food assistance. Of these, seven million people are acutely food insecure, while an additional two million are at risk of slipping into food insecurity if not assisted adequately.

WFP emergency operations in Syria help people affected by the conflict. More information can be found on the Syria emergency page.

What the World Food Programme is doing in Syria

WFP provides emergency food assistance to vulnerable and conflict-affected Syrians through its food distribution programme in all 14 Syrian governorates, subject to access availability. Under this programme, up to 4.5 million people receive assistance from WFP each month with food rations consisting of, amongst others, rice, bulgur wheat, pasta, dried beans and pulses, providing 1,700 kcal per day for one month.

WFP implements activities to address the specific nutritional needs of vulnerable groups, including in children below the age of 5 as well as pregnant and nursing women. This includes programmes to prevent and treat acute malnutrition and micronutrient deficiencies as well as a cash-based-transfer programme that allows pregnant women and nursing mothers to buy fresh food such as vegetables, dairy and meat, in order to increase their dietary diversity. 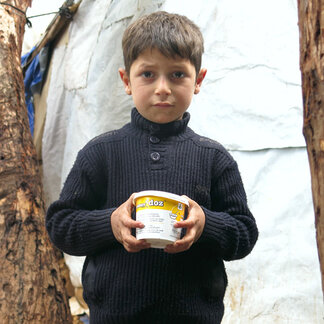 School meals and support to education

WFP runs a school snack programme for school-aged children in more than 400 schools across the country, where children receive fortified date bars during every school day. Furthermore, WFP also implements a programme encouraging out of school children to attend UNICEF supported schools by offering their parents cash-based-transfers that allow them to buy food in selected stores. 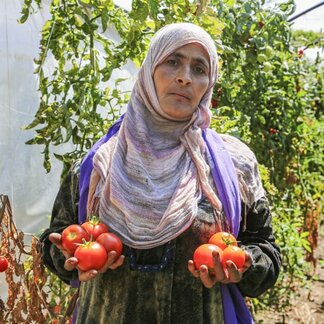 Syria at Six Years — Responding to an Unprecedented Crisis

Achieving Zero Hunger is the work of many. Our work in Syria is made possible by the support and collaboration of our partners and donors, including: