The Republic of Ghana is a West African nation on the Gulf of Guinea. It is renowned within the sub-region for its stability and democratic governance, and over the past 20 years it has made progress in reducing poverty and hunger among its population. However, improvements at the national level mask huge inequalities between the north and south of the country, and between rural and urban areas.

This disparity is, in large part, due to Ghana’s geography, characterized by marked climate, agro-ecological and economic differences. The south has two rainy seasons, while the north has only one. In common with neighbouring Sahelian countries, due to climate change the north is experiencing increasingly erratic rainfall. Elsewhere in the country, soil degradation and erosion caused by alternating floods and droughts are leading to creeping desertification.

Exacerbated by widespread deforestation for charcoal and firewood, this has a severe impact not only on local subsistence agriculture but also the country’s food security. Since 90 percent of households in the northern Ghana rely on agricultural livelihoods, severely limited food production has resulted in chronic poverty, food insecurity and malnutrition. Varying food availability causes price fluctuations throughout the country. Because Ghana is a food deficit country, families are also vulnerable to global price spikes for imported commodities, such as rice.

Over the past decade, chronic malnutrition or stunting among children under 5, has reduced from 23 to 19 percent across the country. However, in the Northern Region, it increased marginally to 33 percent and reaches peaks of 40 percent in some districts. Micronutrient deficiencies, referred to as hidden hunger, persist. Four out of ten women of reproductive age and six out of ten children under 5, are anaemic. These rates are much higher in the north where anaemia affects between 74 and 82 percent of children. The Cost of Hunger in Africa (COHA) study on Ghana reveals that the country loses 6.4 percent of its gross domestic product (GDP) annually to child undernutrition. The report underscores the importance of nutrition to human development and national socio-economic transformation.

Farming communities in the north, however, have few alternative livelihood opportunities, which is why WFP’s work in Ghana also focuses on building resilience.

In the country since 1963, WFP is assisting the Government of Ghana in reducing malnutrition and food insecurity, increasing access to education, and building resilience through a development programme. Through the WFP Centre of Excellence against Hunger, a partnership between WFP and the Government of Brazil, we are providing technical support for the development of the national school feeding programme. In relation to climate change mitigation, we are building the capacity of Government institutions to take over asset creation programmes that we have initiated.

What the World Food Programme is doing in Ghana

After a decade of providing hot school meals in the most food-insecure parts in northern Ghana, WFP has handed over assisted schools to the Government and currently works with its Centre of Excellence against Hunger in Brazil, to provide technical support to the national school feeding programme. WFP provides take-home rations to 30,000 adolescent girls in food-insecure areas where girls’ school attendance is low. 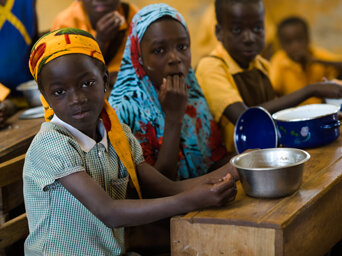 WFP supports the Government’s efforts to prevent stunting and micronutrient deficiencies. Focusing on the 1,000- days from conception to the child’s second birthday , our programmes target pregnant and nursing women, and children between the ages of 6 months to 2 years.. 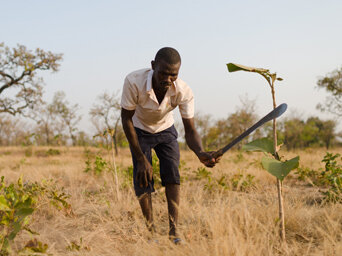 Treatment of malnutrition in people with HIV

WFP provides nutritious foods to 3,000 moderately malnourished people living with HIV who are on anti-retroviral therapy. This improves their nutritional status, and, by reducing side-effects, it helps them adhere to treatment. WFP also provides rations to members of their families. 12,000 family members are currently assisted in this way in order to strengthen domestic support systems for people living with HIV.

Local Food-based Approaches for Improved Nutrition is a pilot project in northern Ghana to reduce stunting and micronutrient deficiencies. WFP promotes the consumption of local nutritious foods and the adoption of healthy behaviours. To increase access to fortified foods for children under 2, we provide electronic vouchers for GrowNut, a lipid-based nutrient supplement.

ENVAC is an integrated agriculture and nutrition value chains project which links 10,000 smallholder farmers to two industrial agro-food processing companies that will produce fortified blended nutritious foods to improve nutrition among women and children. In addition, 30 small-scale women processors of blended flours will be trained to produce safe, nutritious foods in their communities.

WFP supports communities to undertake communal projects aimed at increasing resilience to climate change. Projects such as re-constructing dams for off-season gardening and constructing irrigation facilities and fish ponds, enable people to undertake micro projects, such as dry season gardening, which increase the physical and economic resilience of vulnerable communities.

Established in 2006, the WFP-managed UN Humanitarian Response Depot in Accra is located within Kotoka International Airport. It is strategically placed to support emergency preparedness and response for the West and Central African regions. The depot was a key logistical hub in the international supply chain supporting the medical and humanitarian responses to the Ebola pandemic in West Africa in 2014-2015.

Achieving Zero Hunger is the work of many. Our work in Ghana is made possible by the support and collaboration of our partners and donors, including: