The Kingdom of Cambodia in Southeast Asia saw the effects of brutal conflict and civil unrest which afflicted the country from 1975 to 1991. This caused the deaths of up to three million people and paused economic development. When it was over, the country had to start from scratch.

Despite impressive economic growth during the last decade, rural development lags behind.  Rural communities – which make up 79 percent of the population – account for most of the country’s poor. A significant further proportion of Cambodians lives on the brink of poverty; it has been estimated that losing just US$ 0.3 a day per person in income would double poverty rate.

This fragility means that hazards such as storms, floods, droughts – as well asserious illness and related health expenditure out of pocket – could ruin livelihoods. Yet parts of Cambodia – particularly around Tonlé Sap, the lower Mekong basin and the Mekong delta – are prone to flooding during the Monsoon season, while the rural communities on the plains are vulnerable to localized drought. This erodes resilience and leads to food insecurity and economic inequality.

Hydroelectric schemes and climate change also have a negative impact on the food sources rural communities rely on, affecting fish stocks and rice production. A third of Cambodians do not get the calories they need, and lack of diet diversity is a persistent problem. Thirty-two percent of children under five are stunted and acute malnourishment causes considerable challenges to growth and development. Limited access to qualified medical professionals is still a concern despite ongoing efforts to develop the healthcare system.

WFP has been working in Cambodia since 1979, initially helping the country recover from conflict and latterly focusing on sustainable development. In line with the Sustainable Development Goals, the Cambodia Country Programme aims to improve food and nutrition security in vulnerable communities, at the same time as building their longer-term resilience through better education, health and the creation of infrastructure and other community assets.

WFP is increasingly focusing on capacity development to support national policies and priorities and ensure that the Government and communities are adequately equipped to achieve Zero Hunger. As the Royal Government’s ownership of social protection programmes increases, WFP works to enhance human and systems capacity to develop policies and strategies, create cost-effective and scalable service delivery models, and establish innovative, real-time information systems to ensure efficient and transparent service delivery.

What the World Food Programme is doing in Cambodia

Primary school completion and secondary school enrolment rates in the country are low. To support universal access to eduction, WFP has been providing nutritious school meals to Cambodian pre- and primary school children in rural and food- insecure communities since 2008 We also run programmes offering take-home cash or rice in exchange for at least 80 percent school attendance. To help diversify diets and educate future generations about nutrition, we are establishing school gardens and shifting to Home Grown School Feeding, which allows local smallholder farmers to sell their produce to nearby schools. 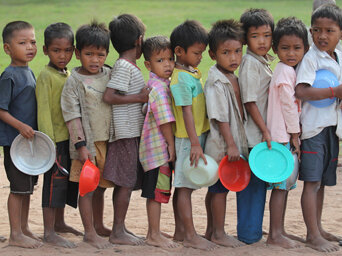 WFP is working with partners to ensure that – starting from the first 1,000 days from conception to a child’s second birthday – Cambodian children receive all the nutrients they need to reach their full potential and build the full potential of future generations in Cambodia. Drawing on its research, operational and technical nutrition expertise, WFP aims to inform the development, transformation, and implementation of nutrition-related initiatives, governance structures, and processes, including the Cambodia SUN network.

WFP helps the Government increase agricultural productivity and strengthen vulnerable communities’ resilience to climate change, floods and droughts. This includes running Food for Assets infrastructure projects in drought- and flood-affected areas, where participants help construct community assets.
Due to the impact of recurrent natural disasters, WFP supports the Government to enhance its coordination capacity in disaster management, emergency preparedness and response at the national and sub-national levels. 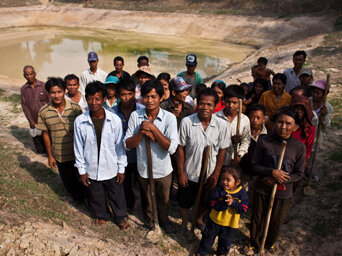